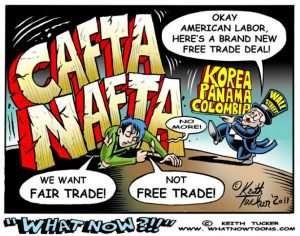 Since its founding, the Reform Party has fought to level the playing field for the American industrial sector, labor and communities built on factory jobs. It wishes to do so by creating common sense trade protections that support the American economy.

In 1992, the Ross Perot campaign (a direct precursor to the Reform Party) campaigned against the North American Free Trade Agreement (NAFTA).

In fact, when we encourage a diverse and strong American economy, the world prospers. Conversely, the belief that we need to sacrifice the jobs and welfare of millions of our fellow Americans at the altar of cheaper products is the belief of a corporate statist, not a democrat. It is the belief of a global citizen, not an American citizen. It places the profits and interest of the few, against the greater needs and value of our Republic. It place a few interest groups above the will and needs of the people. As a people, we cannot accept these policies, or this approach.

We believe our position is reflected in the rising, national wave against our poor trade policies. When people are educated on the issues of trade, a majority support the Reform Party. Currently, according to a Gallup poll, 50% of Americans support “higher import taxes on Chinese products coming into the U.S.” But Congress refuses to act. Many millions support reviewing our trade policies, such as NAFTA. And millions more oppose the Trans Pacific Partnership. And yet, Congress and President Obama are still moving forward.