With the legislation focused heavily on banning funding for abortion, adding billions in funding for subsidies to off-set those removed, tax breaks for wealthier Americans, and removing some of Obamacare’s taxes and requirements, this bill was largely about keeping up the appearance of honoring a campaign promise, rather than finding a solution to better health insurance in the United States.

The American Health Care Act (H.R. 1628) was passed along party lines, with 20 Republicans voting against the bill.

The legislation stands no chance of passing in the Senate in its current form.

In our opinion, the AHCA creates more problems than it solves.

We are well aware of the collapsing exchanges / Obamacare marketplaces. Obamacare as a concept was flawed, and in practice, it has proven to be a costly, inefficient, and unsustainable program that has significantly raised insurance costs for millions of Americans.

However, despite its flaws, the Affordable Care Act (ACA) has provided some much needed benefits for millions of other Americans.

By passing the AHCA, the Republicans have created a plan that not only does nothing to really decrease the cost of health insurance or provide people a means to make it more affordable, it essentially strips coverage away from millions of Americans. 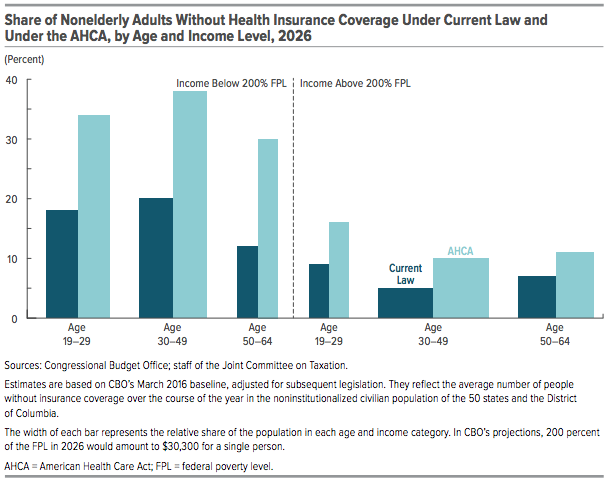 Unfortunately, Republican lawmakers do not need to follow any kind of ethical pledge, like the Hippocratic Oath. Instead of focusing on the broader constituency of Americans, the GOP is focusing on a smaller number of core special interest groups, such as pro-life voters who oppose abortion, and hard-core conservatives, who represent their most energetic base of voters. Republican candidates need both to show up at the polls in 2018 for mid-term elections.

Our national party has referred to this as “tactical political theater” and “a symbolic bill.”

Instead of focusing the last several years, or even the last several months following the 2016 election (when Republicans knew they would control the House, Senate and Presidency), on a series of solutions that would allow for a more seamless transition from ACA to a new system, the AHCA appears to be less about substance and more about appearances and tactics.

While ACA was designed to be a boon for insurance companies, promising millions of new paying customers who would be forced to buy higher priced products, the AHCA is designed to be visually stimulating to some voters, while causing real problems for millions of others who were brought into ACA and now are stuck and need another option.

What we have is another example of the two-parties playing with the lives of millions of Americans in a high-stakes game centered around one thing: the political futures of politicians, not the health care needs of average Americans.

The proposal the Virginia Reform Party is developing is designed to mix private sector and government forces to actually focus on affordability and coverage options.

We believe that by using existing dollars allocated for subsidies into a system that allows people to grow a percentage of money in a Health Savings Account (HSA) through market forces, while providing a guaranteed minimum level of coverage through a federal insurance will help people grow their health savings, and have guaranteed resources for health care expenses.

We also believe that any health care legislation needs to:

The Virginia Reform Party solution will be unveiled in the months ahead. If you have recommendations, please contact us.