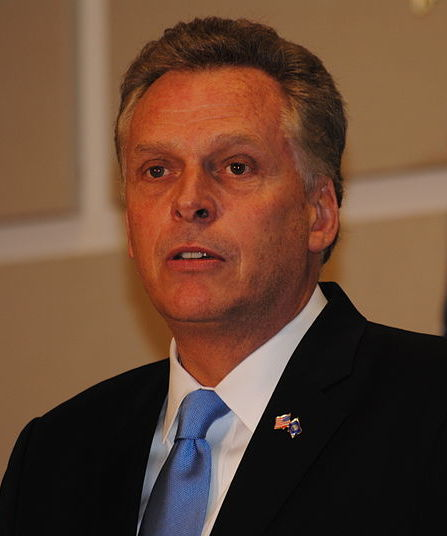 Several days ago, CNN was first to report that Virginia’s Governor, Terry McAuliffe, is under investigation for accepting illegal campaign contributions.

The heart of the allegation according to sources close to the investigation (but by no means the only issue being investigated) is a $120,000 donation from a Chinese businessman, Wang Wenliang. Wenliang, who has served as a delegate to the Chinese Communist Party, made the contribution through US businesses.

A spokesman for McAuliffe pointed out that Wenliang has a Green Card, which means he is not a foreign national. Political contributions from foreign nationals are illegal.

When confronted with the allegation, McAuliffe denied ever having met Wenliang. McAuliffe said, “I didn’t bring the donor in. I didn’t bring him into the Clinton foundation. I’m not sure if I’ve even met the person, to be honest with you.”

Within a few days, McAuliffe’s story changed, and he admitted meeting Wenliang on “one or two occasions.”

The next day, TIME reported that McAuliffe invited the Chinese businessman to a 2013 fundraiser at Hillary Clinton’s personal Washington, D.C., residence. Prior to inviting Wenliang to Clinton’s house, the Chinese businessman had an American company he owns make a $60,000 contribution to McAuliffe’s campaign. A few weeks following the meeting McAuliffe arranged, the Clinton Foundation received $500,000 from a different company owned by Wenliang. Total contributions to the Clinton Foundation reached about $2 million.

From 2012 to recently, Wenliang also was paying the lobbying firm McGuire Woods Consulting $1.5 million to lobby the U.S. government on trade and visa issues. The firm, along with lobbyists, like former Democratic Party Governor of South Carolina, Jim Hodges, did extensive work supporting Chinese business interests in the U.S., and facilitating meetings between Chinese businesses and American politicians. Meetings which later translated into sizable campaign contributions.

Despite his assertions to the contrary, something tells us that Governor McAuliffe would know Mr. Wang Wenliang if he sat in a chair next to him.

Have we become accustomed to legal corruption?

Over the years, we have become accustomed to the technical parsing of the law, vague or carefully worded statements, and expressions of shock from politicians when confronted with allegations of wrong-doing.

Almost everything our political leaders do nowadays is shady or edgy, but very few things are ever technically illegal. When they are – its always someone else’s fault. Or – the other guys do it / did it also.

Was the $1.4 million to a fake Chinese company a payoff?

In 2014, a year after Governor McAuliffe received contributions from Wenliang, the governor made a $1.4 million dollar investment in a Chinese business with taxpayer dollars. The company, known as Lindenburg Industry LLC, received the taxpayer funds in 2014. The deal was supposed to open a factory in Appomattox County and create hundreds of much-needed jobs. However, the company did not exist. Mystery men had falsified a business address in North Carolina. Nevertheless, Governor McAuliffe’s administration paid the money without any verification. A highly unusual arrangement. But again – not illegal.

Now the Appomattox County facility has gone into foreclosure, exposing taxpayers to hundreds of thousands of dollars in unpaid bills to local contractors.

Was this a payoff? Or part of another shady business deal that we will only find out about a few months or years down the road?

We need honesty, and a government that serves our interests

The truth is – Terry McAuliffe has played fast and loose with the law throughout his political career, and has focused extensively on seeking investment from China. He sought investments from China for his failed electric car company, Green Tech Automotive. He used influence to expedite visa applications for investors. The U.S. Government even chastised him and others he was associated with for using inappropriate influence to secure visas.

But it is not all just from China.

Last year, Common Good, which is Terry McAuliffe’s political action committee, returned a $25,000 donation from a company that was connected to the government-owned oil company of the country of Angola. But this was only done AFTER the Associated Press raised questions about its legality.

At some point, we as Virginians have to stand up to obvious political corruption, regardless of whether our politicians have made it legal corruption or not.

And our efforts must be more targeted than over-turning Citizens United, which has become a popular red herring for politicians looking for cover on campaign finance reform. It is a FACT that none of what McAuliffe has done would have been regulated by the original Bipartisan Campaign Reform Act of 2002 (otherwise known as BCRA or McCain–Feingold). McCain-Feingold restricted free-speech during elections, barring some from publishing pamphlets, websites, books or tv commercials (for example) that mentioned a candidate by name. It has nothing to do with buying politicians or influencing state or federal government policy.

Our goal instead should be to make it more difficult for politicians to receive contributions from foreign governments and foreign business interests.

Where we cannot outlaw behavior, we can restrict it by making the reporting requirements more detailed and requiring public review periods before action is taken.

We need to tighten the loopholes to ensure no payouts can be made to businesses unless they have been completely verified as legitimate.

And we need to take additional common sense steps to reduce the influence of organizations that serve as nothing more than policy factories for special interest groups.

Lastly, it is our belief that Governor Terry McAuliffe needs to resign. While he may not have technically committed a crime as defined by our existing laws, his behavior has been criminal. In a short tenure as governor, McAuliffe has put special interests, foreign interests, and his own political interests ahead of Virginia and the United States. He is not fit to lead our great state. We as Virginians deserve better.

If you are interested in learning more about the Reform Party of Virginia or joining our efforts, please sign up today and get involved. We need your help!